The first quarter of 2016, of our first full year serving in full time ministry in Honduras, has come to a close. Combined we have spent approximately five of the first fifteen weeks of this year serving alongside three different mission teams, and then another few days serving with Cassie, Josh, Jenna, Meily, and Aisha who are friends and missionaries also serving with Frontline Missions. And while the cover of the newsletter features on the most recent team that was here we would like to dedicate a little blog space reflecting on the beauty of how all of our teams have worked separately but together.

Our first team came down to Honduras towards the end of January with the primary purpose being to speak and teach in several different churches on prayer and other topics. In addition to that we also took our first trips to Mezcalillo and Arcamón to begin new ministries in these communities because neither of them have an evangelical church. Our second team came down just a couple of weeks later in February with plans to build on what was started in January. In between these two teams was the visit from our Frontline friends and missionaries who got to help us build on what was started in Arcamón in January.

While things went largely as planned for our January team, very few things went as planned for our February team. But God is sovereign so we knew He orchestrated all of the changes that took place. This team rolled with every change that came along, but not only did they roll with the changes but they eagerly embraced the opportunities that God brought them through the changes. One of our plans was for this team was to go to Mezcalillo for a day to build on the foundation laid by the January team but we couldn’t make it because of the muddy road conditions. So on that day this team ended up going to Coalaca and spending an afternoon in the elementary school ministering to the kids there for the first time. At that time we had a new church construction project already under way in Coalaca and our plan was for the Kentucky team to lay the foundation in Coalaca in March by ministering to the children, and doing medical clinics and construction.

We love the way Paul described this very thing in the first letter he wrote to the church in Corinth:

“According to the grace of God which was given to me, like a wise master builder I laid a foundation, and another is building on it. But each man must be careful how he builds on it. For no man can lay a foundation other than the one which is laid, which is Jesus Christ.”-1 Cor. 3:10-11, NASB

Preceding these verses Paul used an agricultural illustration to make a similar point about working separately but together:

“For when one says, ‘I am of Paul,’ and another, ‘I am of Apollos,’ are you not mere men? What then is Apollos? And what is Paul? Servants through whom you believed, even as the Lord gave opportunity to each one. I planted, Apollos watered, but God was causing the growth.”-1Cor 3:4-6, NASB

Sandwiched between these two illustrations is the application. A wise teacher and personal friend of ours once told us that whenever preparing teaching material do not wait until the end to give all of the application. Something might happen that causes you to not make it to the end of the lesson so it is better to sprinkle the application throughout the lesson to make sure that if something happens the listeners will at least get some of the application. It would appear that she learned this from the Apostle Paul because that is exactly what he did.

He gave the agricultural illustration first and concluded that portion by stating that it does not matter who plants, or who waters, because God is the one who brings the growth (see verses 7-9). Paul was not diminishing our roles in the process, he was simply stating that one person is not better than the other because they got to do a certain part. It is better for us to work together with our focus on God instead of trying to work together while worrying about who is getting the recognition, or who is getting to do the “better part”.

After that he gave the construction illustration and concluded that not only do we have to work together in unity, but we also have to work together carefully, to make sure that we are building properly. Obviously the foundation is laid first and that must be built properly or else the whole structure will fail eventually. The same goes for every part that is built on top of the foundation. Should the construction at any point not be done properly, some or all of the structure will fail eventually. And the same principle applies in ministry. 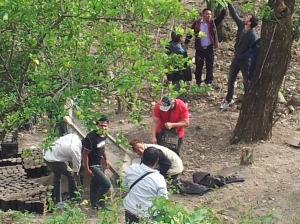 Children hearing the story of Jesus on the side of the road in Rancho Obispo-the February team. 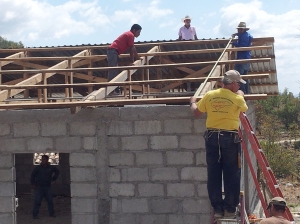 KY team helping to build the church in Coalaca.

This site uses Akismet to reduce spam. Learn how your comment data is processed.